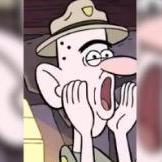 Just watched JMac goal again, and something I missed at the time was Bouzanis running length of the pitch and absolutely giving it to Berisha and Mcdonald on the way past. He really is one of us at ti

You are forgetying season 1 when we took 10 ppl to Gold Coast away.

I'm based in Newport. If Melbourne based supporters (N, E, S or W) think that Geelong is too far away to make the effort then A-league will never grow.  I was down there for their game again