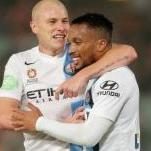 Just members in for free? What a fucking joke! What about those of us who were passionate dedicated FOUNDATION members of this club back when it was Melbourne Heart who no longer buy memberships out o